The second in a four-part online concert series, the Oxford Philharmonic present a jam-packed programme of Baroque favourites on Friday 15 January, from Pachelbel’s Canon to Bach’s ‘Air on the G String’. Music Director Marios Papadopoulos directs the Orchestra from the harpsichord in Bach’s Brandenburg Concerto No. 4, joined by soloists Anthony Robb and Robert Manasse on flute, and Carmine Lauri on violin. Natalia Lomeiko performs Bach’s Violin Concerto in A minor – one of only two of the composer’s surviving violin concertos. Four of the Orchestra’s principals also perform Vivaldi’s Concerto for 4 Violins: Tamás András, Yuri Zhislin, Charlotte Scott and Shlomy Dobrinsky. 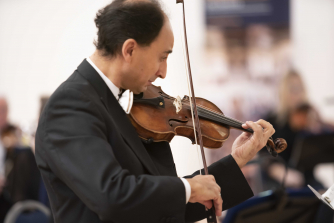