Five Impressions of Shakespeare’s The Tempest (with Prelude), for cello and piano

American composer Geoffrey Gordon’s powerful ‘cello and piano sonata FATHOMS receives its UK premiere with Danish cellist Toke Møldrup, among the most prominent musicians in Scandinavia, and Steven Beck, one of the finest young American pianists.

They present FATHOMS in a rich programme of American, English and Danish music which opens with Gordon’s Lorca Music per Cello Solo, followed by Koppel’s Ternio, Op. 53b – one of the Danish composer’s best known and most exuberant works, Britten’s Cello Sonata and Vaughan Williams’ Six Studies in English Folk Song. 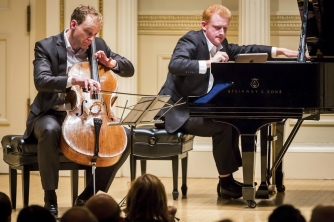