Franz Schubert – Rondo in B minor 'Brilliant', D.895
Johannes Brahms – Violin Sonata no.2 in A major, Op.100
~ Interval ~
Maurice Ravel – Sonata for violin & piano no.1 in A minor 'posthumous'
César Franck – Violin Sonata in A Major

International Musicians Platform – As You Like It: Shakespeare Songs

Tasmin Little has firmly established herself as one of today's leading international violinists. She has performed on every continent in some of the most prestigious venues of the world, including Carnegie Hall, Musikverein, Concertgebouw, Philharmonie, Vienna Konzerthaus, South Bank Centre, Barbican Centre and Royal Albert Hall, Lincoln Center and Suntory Hall.

Her multi-award winning and varied career encompasses international concerto and recital performances, masterclasses, workshops and outreach work in the community. Tasmin's discography and performance schedule reflect her wide-ranging repertoire and she has given numerous World Premiere performances including concerti by Willem Jeths, Robin de Raaf, Stuart MacRae, Robert Saxton and Dominic Muldowney. Most recently, her newly commissioned work, Four World Seasons by Roxanna Panufnik, was premiered as a live broadcast on the BBC at the start of Music Nation weekend, leading up to the London 2012 Olympic games. She remains one of the few violinists to perform Ligeti's challenging violin concerto and has performed this work at the Berlin Philharmonie, Carnegie Hall, Salzburg Festival, BBC Proms, Amsterdam Concertgebouw and the Kimmel Center in Philadelphia. 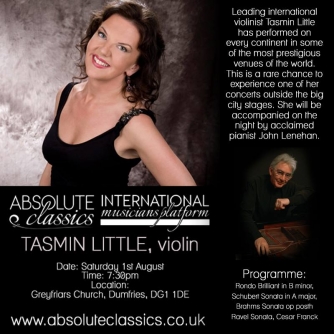