Print Email Twitter Facebook
Add to my Calendar 02-02-2017 13:15 02-02-2017 15:15 36 Thursday LIVE at St Chad's Cathedral February&#39;s Thursday LIVE is a&nbsp;programme of organ music by J.S. Bach. 40-minute Organ Recitals at&nbsp;St Chad&rsquo;s Metropolitan Cathedral, Birmingham on the first Thursday of each month: 1.15pm &ndash; 1.55pm. The organ of St Chad&rsquo;s Cathedral dates from 1993 and was&nbsp;built by J. W. Walker &amp; Sons, it is considered one of the finest in the Midlands. The &#39;Thursday Live&#39; series was established in 2008 by Paul Carr and the&nbsp;first eight years of recitals were hosted at St Paul&rsquo;s in the&nbsp;Jewellery Quarter where Paul is Director of Music. With the&nbsp;increasingly unreliable nature of the St Paul&rsquo;s organ before its&nbsp;planned rebuild, the decision was made&nbsp;to transfer the series to St Chad&rsquo;s&nbsp;Cathedral which is only a short walk&nbsp;from St Paul&rsquo;s. St Chad's Cathedral, Birmingham DD/MM/YYYY

February's Thursday LIVE is a programme of organ music by J.S. Bach.

The organ of St Chad’s Cathedral dates from 1993 and was built by J. W. Walker & Sons, it is considered one of the finest in the Midlands.

The 'Thursday Live' series was established in 2008 by Paul Carr and the first eight years of recitals were hosted at St Paul’s in the Jewellery Quarter where Paul is Director of Music. With the increasingly unreliable nature of the St Paul’s organ before its planned rebuild, the decision was made to transfer the series to St Chad’s Cathedral which is only a short walk from St Paul’s. 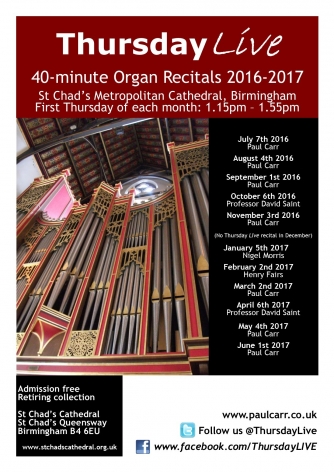