Print Email Twitter Facebook
Add to my Calendar 02-11-2017 13:15 02-11-2017 15:15 36 Thursday LIVE at St Chad's Cathedral 40-minute Organ Recitals at&nbsp;St Chad&rsquo;s Metropolitan Cathedral, Birmingham on the first Thursday of each month: 1.15pm &ndash; 1.55pm. The organ of St Chad&rsquo;s Cathedral dates from 1993 and was built by J. W. Walker &amp; Sons as part of the Cathedral&rsquo;s 150th anniversary restoration. There are 40 speaking stops and&nbsp;it is considered one of the finest organs in the Midlands.&nbsp; Thursday Live was established in 2008 by Paul Carr at St Paul&rsquo;s Birmingham. The series transferred to St Chad&rsquo;s Cathedral in June 2016. St Chad's Cathedral, Birmingham DD/MM/YYYY 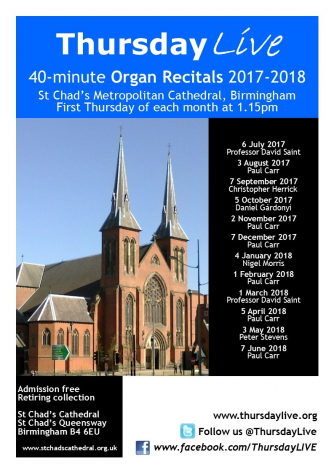