Thomas Morley – It was a lover and his lass (As you like it: Act V Scene 3)
William Byrd – O Lord, make thy servant Elizabeth, our Queen
William Byrd – Why Do I Use My Paper Ink and Pen?
Huw Watkins – The Phoenix and the Turtle
William Byrd – Fantasia a 5, 'Two parts in one in the fourth above'
Thomas Tomkins – Be strong and of a good courage
Robert Ramsey – Sleep Fleshly Birth
William Byrd – Browning a 5, 'The leaves be green'
Robert Johnson – Full Fathom Five (The Tempest: Act I Scene 2)
Nico Muhly – Gentle sleep
Orlando Gibbons – In nomine no. 1
John Wilbye – Draw on, Sweet Night

Prom 1: First Night of the Proms

Learn to Play with Music for All

Prom 14: Rossini – The Barber of Seville

Proms in the Park Wales

Prom 75: Last Night of the Proms

BBC Proms in the Park Scotland 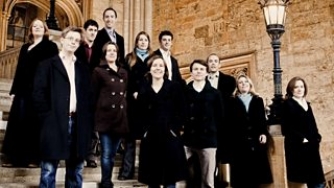