Part of the Brandenburg Choral Festival of London 2017 Spring Series

Britten Ceremony of Carols by candlelight

Spem in Alium by candlelight

Bach to The Beatles

Will Todd Mass in Blue

Music of Our Time

Sure on this Shining Night

Schubert: The Lord is my Shepherd – A feast of music and poetry

The Brandenburg Choral Festival of London welcomes Cambridge University Musical Society Symphony Chorus and Percussion Ensemble for this exciting programme featuring Eric Whitacre's magnificent Cloudburst. The chorus will also perform works by Aaron Copland and Nicholas Maw alongside the London Premiere of Toby Young's Nature's Beauty, which was commissioned by the choir and will be premiered in Cambridge on the 4th March. The concert will also feature mezzo-soprano Carris Jones performing excerpts from Copland's Twelve Poems of Emily Dickinson and pianist Leo Popplewell providing some contrast with a movement of Schumann's delightful Fantasiestücke for solo piano. 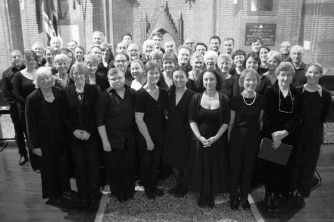